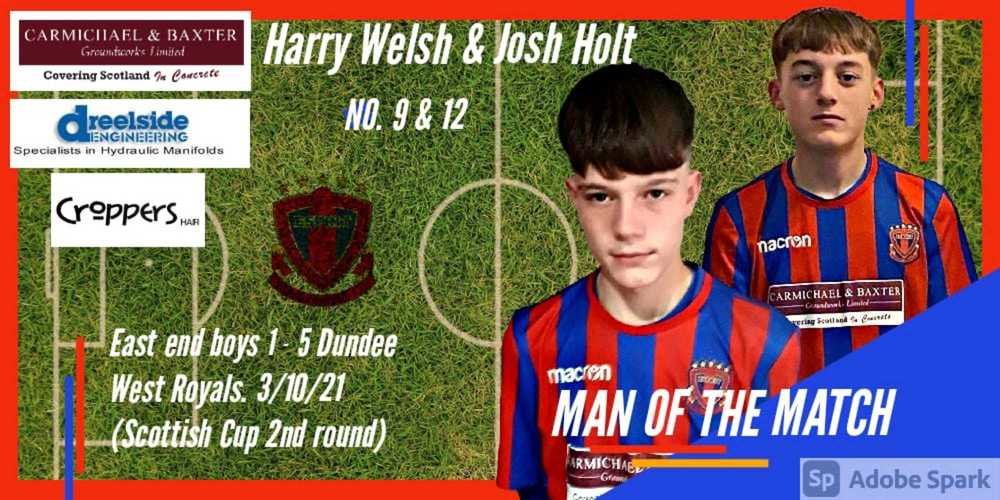 Scottish Cup second round away to East End Boys in Dunfermline.

The coaches asked for a fast start from the lads today, with it being such an early kick off, and the boys were only too happy to oblige, taking the lead with 3 minutes on the clock, with Harry Welsh turning brilliantly in the box, and getting a shot off, which their keeper did well to save, but the predator that he is, Ben Martin, was first to react and slotted the rebound home.

The West were hungry for more and 2 minutes later Ben Martin turned provider this time by robbing the defender of the ball and making a superb pass through to Harry Welsh to slot in the second.

On 13 minutes a great run and cut back from Harry Welsh found Ben Martin who banged in his second of the day.

East End Boys were no mugs and had some very decent players but our defence remained very disciplined throughout the first half.  Michael Gray had a superb game with great passing and surging runs and he did not fail to forget his defensive duties.  Evan Boland at LCB did all that was asked as well, particularly winning headers and stopping threat down the left-hand side and at the centre of the defence Jack Davidson was cool and calm on the ball and organised it well at the back.

Second half we knew East End would have to come at us and they got an early goal that we were dreading.  The goal came from a free kick at the side of the box which was driven in low and hard and we failed to clear and a shot took a couple of deflections and ended up in the back of our net.  3-1.

Dundee West now had to finish this game off with East End pressing.  We cleared a corner and in a great counter attacking move, the ball was picked up by Ruari Mackie in CM and he played a perfectly weighted pass to Josh Holt, who clinically fired the ball into the right hand corner.

Just after the 50 minute mark, the game was put to bed. A through ball from Flynn Carmichael was rifled in off the underside of the crossbar by Keiran Luke who thoroughly deserved a goal, and the smile on his face afterwards was proof of that.

In summary, every one of the players did everything that was asked of them.  Callum Luke and Mark Valentine battled hard in the middle of the park, Robbie Gilchrist worked tirelessly as usual, Ruari Mackie had brilliant passing and movement, Carden Forbes worked his socks off, with brilliant crosses and was not afraid to pass the ball back.  Luca Robertson and Kyle Nicoll came on in defence at a time when the team were going to be pressed but soon settled and Kyle Wilson pulled off some amazing saves and commanded his area, all this after just coming back from injury.   Josh Holt, in his first competitive game, looked like he’d been part of the team for years.

Coaches players of the week: